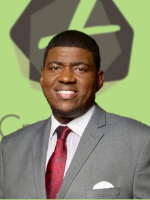 Pastor Nate Stewart is a native of Macon, Georgia. Immediately after high school, Pastor Nate attended college on a football scholarship. His dream was to play for the NFL, but those plans were halted after he suffered a major knee injury during his freshman year. It was at this time that Pastor Nate began to really pray and seek God about his life and his future.

In 1997 Pastor Nate accepted his call to full-time ministry and the journey began at The Florida School of Preaching. He moved on to Christian Bible College where he received his Bachelor of Theology Degree and Master of Ministry Degree in Christian Counseling. Pastor Nate served six and a half years as the Pastor of Youth, Young Adults, and Singles at St. Mark Baptist Church in Little Rock, Arkansas. He was also privileged to serve as one of the  interim Teaching Pastors from 2011-2013.

In 2013 Pastor Nate relocated to Cleveland, Ohio, to serve as the Executive Director of Ministry at New Community Bible Fellowship, under the dynamic leadership of Pastor Kevin E. James. Two years later, an amazing door opened for Pastor Nate, and he returned to his home state to serve as the Executive Pastor at The House of Hope Atlanta and The House of Hope Macon, under the direction of his spiritual father and mentor, Dr. E. Dewey Smith, Jr. He later became the campus Pastor of their third location, The House of Hope Southpoint.

In 2017, Pastor Nate received an unexpected call from the Lord to serve as the Senior Pastor of Greater Life Church. After much hesitation and prayer he accepted the offer, and moved his family to San Diego, California to serve as the 3rd Pastor in the church’s 45 year history. In the first 2 years alone under Pastor Nate’s Leadership….the church’s weekly attendance, membership, and giving skyrocketed! The Lord blessed with over 200 new partners, thus resulting in the need to begin the renovation & expansion of the church campus. Since the arrival of Pastor Nate, the church has seen tremendous growth spiritually, numerically, and aesthetically. They were recognized as one of the top 100 US Emerging Churches to Watch by Outreach Magazine, they continue to break ground on and complete various phases of the Greater Campus Renovation & Expansion Building Project, and they have even begun the launching of their first-ever Greater Life Academy. Now, after 3 years and 600+ new partners, God continues to demonstrate the outpouring of His love, blessings, favor, and Holy Spirit over this ministry.

Pastor Nate has been blessed to travel throughout the country conducting revivals, workshops, and seminars. He has also shared the Gospel internationally in Haiti and Jamaica. His daily desire is to serve his sheep with integrity, and to faithfully fulfill his first ministry as a husband and father. Pastor Nate’s guiding scripture for life and ministry is Proverbs 3:5-6, “Trust In the Lord will all your heart and lean not on your own understanding; in all your ways submit to Him, and He will make your paths straight.”